Hello? Is someone there? Ah! Readers! Thank goodness you’re here, you are just in time for another post – all about the Bournemouth Invasion! 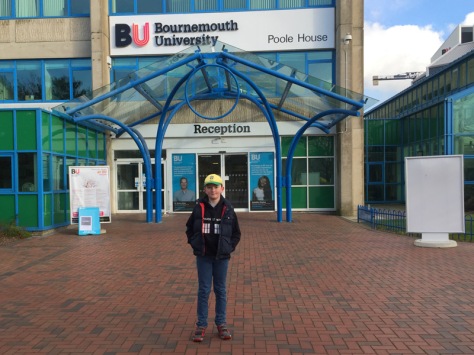 As soon as I arrived I went to a talk by my old pal Simon Fisher-Becker who I had met at DEFCon 3. Simon is best known for playing Dorium Maldovar alongside the Eleventh Doctor and is the ‘best blue actor in the business’! His one-man show is called ‘My Dalek Has a Puncture‘ and is all about his life and is full of advice for anyone who wants to be come an actor. Lauren Wilson who played Daughter of Mine in the two-parter Human Nature and Family of Blood (2007) was in the audience. I hope she got some good tips!

Simon spoke about his childhood in South Ruislip. He was bullied horribly when he was a child and he learnt to always look for the silver lining. I hope his bullies are ashamed of themselves.

Doctor Who started two days before Simon’s 2nd birthday and he would watch it with his grandfather – little did he know that one day he would be a Doctor Who actor himself! He lived near a Police Box and would look out for the Doctor but never saw him.

Simon has had many other jobs including the Civil Service, an Event Organiser, a deputy Town Crier and an ‘Ugly’ model. I also found out that he used to play Sir Topham Hatt from Thomas the Tank Engine!

I enjoyed ‘My Dalek Has a Puncture’ – it was funny and a bit fruity! If you get the chance you should definitely go and see it. 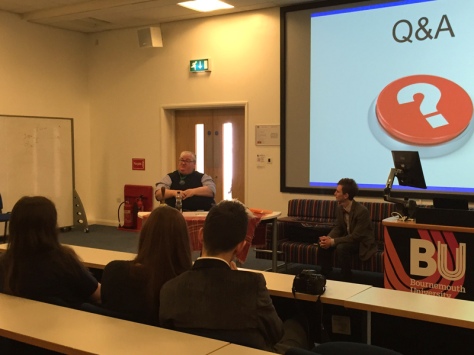 After the talk I went to do the Ultimate Franchise Quiz No 1. I was playing on my own and I was a bit shaky ; I didn’t do very well! The picture round was my best round but two of the rounds weren’t about Doctor Who and I didn’t know the answers as they were about things like Star Trek, Marvel and Firefly. The Quotes Round was really hard too. I did enjoy it though – even if I wasn’t very good. Congratulations to one of my companions who came first with a score of 31 out of 50!

Lunch was next and I got to watch a bit of the Middlesborough v Leeds match whilst I ate a veggie burger in the Student Bar. I got back from lunch too late to see Andrew Cartmel‘s talk and I was sad about that as I was looking forward to hearing about the scripts for the Seventh Doctor who is, as you know, my favourite Classic Doctor. I did get to say hello to Andrew though, and he remembered me from the SF Ball 21. 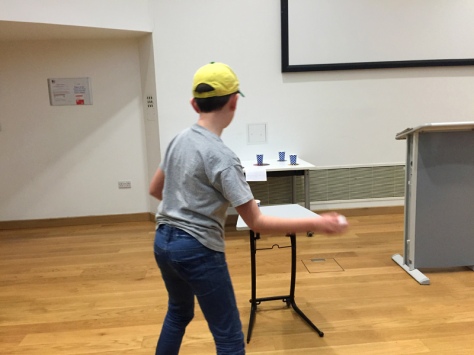 In one of the rooms there were lots of games including a raffle, Guess How Many Jelly Babies in the Jar and ……PLANET PONG!! YEAH! Planet Pong was a devilishly difficult game that involved bouncing a ping-pong ball off a table to land in a cup. Each cup represented a planet and there were pictures of them under each cup that looked like pancakes. I had several tries and I was determined to do it – but I was defeated. By a cup.

Next I went upstairs and went to a room which was set up with a green screen and I got to pose for some photos and chose a TARDIS background. I’m looking forward to seeing the finished picture and will update this when I get it so that I can show you too!

Then it was time to meet Terry Molloy aka Davros! I had already met Terry at the Timeless Collectors Fair but this time I got to spend more time with him and chose a fantastic picture from Revelation of the Daleks (1985) for him to sign.

I asked Terry my 3 golden questions. First I asked him where he would go if he could go anywhere in time and space . He said that he would like to travel back to Ancient Rome to see Julius Caesar or to the time of Richard III.  His favourite episode of Series 8 was Listen (2014) and Terry said that Peter Capaldi is a really good Doctor – just as Terry expected. I asked him about his favourite filming location but he said all his scenes as Davros were filmed in a studio. His favourite filming location ever was when he filmed Carrott Del Sol in Spain for six weeks with Jasper Carrott and Bernard Latham.

After I met Terry I went to the park for a quick play then came back for ‘I, Davros’ a Q&A session with Terry all about Davros and his career.

Terry was asked about any memories of playing Davros – he said he remembered pain, claustrophobia, sweat, no peripheral vision and dragging a shopping trolley around with his toes! Davros was a physically challenging role that was hard work but great fun.

The 5 people Terry would like to go out on the town with are Leonard Rossiter, Aneurin Bevan, Michael Palin, Charles Darwin and Jacqueline Du Pre. He also mentioned someone he would like to roast for dinner – but I’m not telling you who!

He likes Doctor Who because it is quintessentially ( I had to look that up!) British and that he would love to throw the Sonic Screwdriver into a black hole because the Doctor only needs to use his brain power.

Terry said there would be a test on nuclear fission at the end – I’m glad he was only joking. I thought his Q&A was inspiring and I really liked Terry – he is not at all scary like Davros!

Next I went to do my second quiz of the day – this time it was a Team Quiz so I felt a bit more confident with my two companions at my side. I enjoyed all the questions, it was more fun conferring with my team mates. The Quotes Round baffled us for a second time but we still breezed through and were joint winners in a 3-way tie with a score of 35 out of 50!

Finally came the Closing Ceremony of this Whovian Convention and we all gathered together to thank everyone involved in this amazing event. Terry and Simon said they were pleased to be part of a first time convention. I hope this will be the first of many to come as I thought the day was phenomenal and everybody worked so hard to make this such an enjoyable day.

Thanks for reading, and see you soon for another location report. Until we meet again, goodbye!