Hello and welcome to Kent – The Garden of England! It is August 2016 and the hottest day of the year so let’s cool down and take a little dip in the sea. Let’s go to Botany Bay in Broadstairs, filming location for Classic Doctor Who episode Fury from the Deep (1968).

Fury from the Deep is a lost story from the Fifth Season of Doctor Who so I’m afraid I haven’t seen it but from what I have heard it is the first episode that features the Sonic Screwdriver. I still want to follow in the Doctor’s footsteps even if I haven’t seen the episode! This time I am following the Second Doctor, Patrick Troughton, and his companions Jamie and Victoria who are at the beach to investigate a mysterious sea foam. Botany Bay was also a filming location for a BBC series called True Love which featured many Doctor Who stars including Tenth Doctor David Tennant, Billie Piper, David Morrisey and Ashley Walters.

Botany Bay is the northernmost of seven bays in the Broadstairs area of Kent and is a popular tourist attraction. People come to swim, play on the sand and sunbathe and look at the unusual white cliffs. The cliffs are paper white because they are made of chalk. There’s a lot more to chalk than you may think. It was formed during the Cretaceous period, where the cretaceous period gets its name – the Latin word for chalk – Creta. Chalk is made of calcium carbonate which is why it is white. Calcium carbonate is formed by lots of coccoliths which are plant skeletons that have been compacted over millions of years! 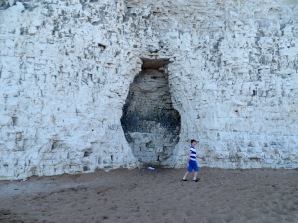 The cliffs are so white they dazzle me

I’m looking for a big chalk stack, can you see it?

Botany Bay has a history of being a popular smuggling location. In the 1700s a man called Joss Snelling led a group called the Callis Court Gang and they would bring contraband ashore at Botany Bay. One night in 1769 they were ambushed by a Revenue Patrol and there was a gunfight and many people were killed in the Battle of Botany Bay.

To think these cliffs are made of plant skeletons!

I wonder if the smugglers hid here?

Nice and shady in this spot

Luckily when I went it was more peaceful. I couldn’t see any mysterious seafoam or smugglers. I parked my TARDIS on a nearby road and everyone was like ‘Wow! A TARDIS!’ (not really) then I walked along the cliff top and the hedges were full of little birdies. Although it was early evening the beach was very busy with everyone enjoying the sun during the heatwave. I went on to the sand, which was very warm under my feet, and walked along near the cliff face. 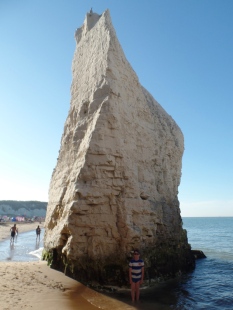 I hope that rock doesn’t fall over!

It’s much cooler down here 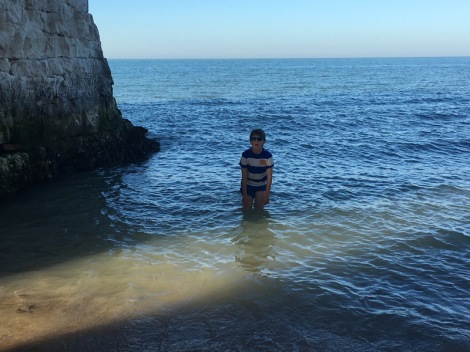 A nice way to cool down

I wanted to dip my feet in so I went for a walk in the sea. The sea was a bit stony but not too bad, it was soft enough to walk on and there was not too much seaweed which is good as it feels weird around my feet. Sometimes there are rock pools to go crabbing in but not while I was there as the tide was in. It was a great way to cool down.

In the distance I could see the Thanet Offshore Windfarm aka the TOW. This windfarm is the third largest offshore windfarm in the world and is located 12km off Foreness Point in Margate. These wind turbines produce electricity – enough clean energy to power over 200,000 UK households! I like looking at wind turbines as they have a good effect on our world and help take care of this planet for the future.

I had a really fun time at Botany Bay, it was my favourite beach in Kent. Thank you to Doctor Who – The Locations Guide once more for helping to find this location. I really hope that I get to watch Fury from the Deep one day when it is found and get to see what the Doctor got up to at Botany Bay!

The next Film & Comic Con Bournemouth is coming up in just a few days – I will be there to meet more Doctor Who stars so I hope you will come back and see me again to read about it.

Thank you for reading. Bye!

PS – I also went to Whitstable whilst I was in Kent and discovered it was the home of Peter Cushing who played the Doctor in the Doctor Who movies of the 1960s!