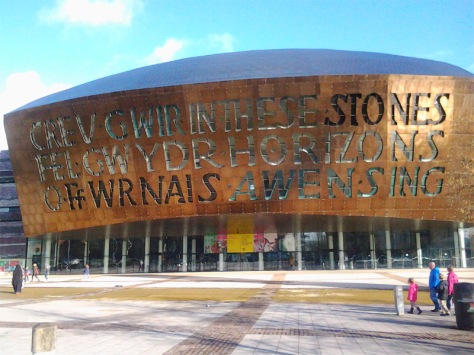 That is hello and welcome back, in Welsh. I am speaking in Welsh because in this post we are travelling back in time a little way to Cardiff in February 2014. The location this time is Wales Millennium Centre or Canolfan Mileniwn Cymru in Welsh. This building is also known as The Armadillo. Above the main entrance are two poetic lines, written by Welsh poet Gwyneth Lewis. The Welsh version is

which means “Creating truth like glass from the furnace of inspiration.”

In These Stones Horizons Sing.

I arrived via the entrance that was used for Vincent and the Doctor (2010). The Doctor, Amy and Vincent Van Gogh were filmed here rocking up to Vincent’s museum exhibition. The inside of the museum was filmed in another location which I will tell you about in another post.

The reception was the filming location for New Earth (2006) and was where the Tenth Doctor and Rose visited New New York Hospital which was run by the cat-nuns the Sisters of Plenitude. This episode was the first of the new episodes to be set on a distant planet (even though it is called new Earth) as all of the Ninth Doctor’s stories were set on or in the orbit of Earth! Luckily I didn’t bump into the cat-nuns as they were arrested by the New New York Police Department.

Next I walked down the stairs that the new Prime Minister Harold Saxon (aka The Master) stood on as he gave his famous speech:

Maybe people thought I was him, only younger! This scene was in the episode The Sound of Drums (2007) in which the Master plans some totally awful plans and the Tenth Doctor, Martha and Captain Jack have to stop him.

I explored all around the centre and visited an art exhibition of the National Eisteddfod Gold Medal winners which  included a mixture of jewellery, ceramics, installation, painting and photography. Finally I shot the breeze with a very chatty centre guide who was really friendly and told me lots of stories about when things have been filmed in the centre, and he said that the people of Cardiff are very proud that Doctor Who is filmed there and like to help and watch. He also said that the guides love to answer questions and not to be shy. I wish I could see them filming Doc Who.

To all my viewers from these different countries so far, thank you for looking – United Kingdom, United States, Sweden, Australia, Canada, New Zealand, Ireland, Russian Federation, Egypt, India, France, Belgium, Portugal, South Africa, Japan and Spain! I’m quite surprised about all the different places that people have looked at this blog from. I wish I could be truly international and have a viewer from every country in the world, but not every planet because aliens might not understand my blog! If you are viewing from another planet please do not, I repeat do not, delete my blog. If you are viewing from another country please leave a comment to say hello and tell me where you are from – I would love to hear from you.

Here is another TARDIS which I found in the Portsmouth Historic Dockyard earlier this month! It must have been the TARDIS of one of the older Doctors because it doesn’t look like the one in Boscombe. The chameleon circuit must have gone wrong because it didn’t look quite right! I couldn’t look inside because the Doctor locked it behind him.

It was a very blowy day that almost took me off my feet so maybe that was the TARDIS materialising? The Sea Devils must have come to the dockyard with their cousins the Silurians to take over the world. ‘NOT THIS TIME! C’mon out, I’ll give you a taste of your own medicine!’ Maybe I saved the day, or the Doctor did. Either way is good!

I like going to the dockyard because it is full of historical ships and I like learning about Horatio Nelson because he is a hero of mine; he met with the Second Doctor in the book HMS TARDIS when the Doctor, Ben and Polly materialised on HMS Victory. I have been on the Victory lots of times, it is my favourite ship at the dockyard. There is so much more to see including HMS Alliance, the Mary Rose and HMS Warrior but I like the Victory the best. 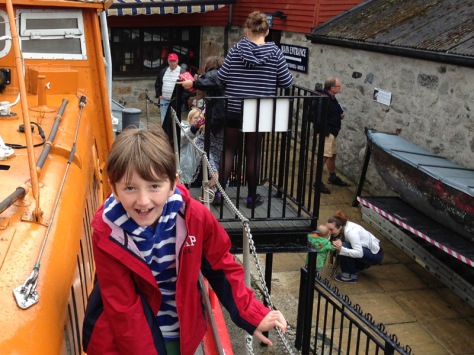 Now for a new location for ye all to see. Yet again we travel back in time to August 2013 to see the location of Charlestown, Cornwall. This was the location for the filming of The Curse of the Black Spot (2011). This episode features the Eleventh Doctor, Amy and Rory who investigate the clues to find the missing crew of the Fancy, a pirate ship.

I travelled to Charlestown by TARDIS and I had some very special companions on this journey – my grandparents! The weather was very grotty (well,that’s how I say it) and wet even though it was summer.  Charlestown is a harbour village and is where people export china clay. Our first stop was the Charlestown Shipwreck and Heritage Centre where we learnt about lots of shipwrecks including the RMS Titanic – not the interstellar cruise liner Titanic in Voyage of the Damned (2007)!  I also learnt about the history of the area  and got on a lifeboat.

We looked at the ships in the harbour which are used for films such as Great Expectations,  Apocalypto and The Scarlet Pimpernel and TV including The Curse of the Black Spot. The Phoenix (the Fancy in the episode) is open to the public and you can go on board where Matt Smith, Karen Gillan and Arthur Darvill have walked and see where they have been swash-buckling!

After all this we went in an Inn and I ate maggots in my biscuits and drank revolting rum . Just joking.

I remember it as a fun day, as it was the first day of my holiday with my grandparents who I was staying with for a week. I definitely want to go again and you can go too.

Blast with ya all, ye scally-wags!  AARRR, time to walk the plank!!

My FAVOURITE way to spend a sunny day outside is go to places where they have filmed Doctor Who of course! So on a beautiful sunny bank holiday weekend I went to Athelhampton House and Gardens, location of The Seeds of Doom (1976).

The Seeds of Doom features The Fourth Doctor and Sarah Jane and Athelhampton is used as the house of eccentric millionaire Harrison Chase. He has a seed pod found in the arctic permafrost which contains a Krynoid…. OF DOOM.  The Doctor and his companion must stop Harrison and the carnivorous Krynoid from destroying the world.

In the 8 years of my life, this is only the second time I have visited Athelhampton. I used the chameleon circuit to disguise my TARDIS as a car and parked in the car park which was very busy because there was a plant sale. It is lucky there were no Krynoid pods for sale so I didn’t have to worry about fighting plants! First I explored the surprising gardens, one called The Great Court had pyramid shaped yew trees! There were spitting fountains and a huge pond – I couldn’t see any fish but I did see pond weed and pond snails.  I took a walk along the River Piddle and was very glad it was made of water! I then entered the whiffy Dovecote which was quite dark, cool and a bit smelly because it was full of doves.

Next I visited the house which was built in the 15th century – you can’t look in every room because people live there. It was quite dark inside and I had to be patient on the stairs as there were a lot of other visitors. Everything was very old but I felt very welcome there. On the top floor there were paintings made by Marevna who was an artist who once lived at Athelhampton. My favourite was one with a man and a goat – look out for it if you go there.

I left via the gift shop where you can buy Doctor Who stuff and all that jazz and I bought the book The Seeds of Doom and The Deadly Assassin.  The receptionist was very kind and said that I should read John Challis’ autobiography if I want to find out more about the filming at Athelhampton as he played Scorby in the episode.

Athelhampton was also the location for ‘From Time to Time’ (2009) and ‘Sleuth’ (1972). I hope you keep enjoying the locations in this blog  – which location do you think I should do next? Have you been anywhere that Doctor Who has been filmed? Please leave a comment with your answer to these questions, I would love to hear from you.