Hello and welcome to another Film & Comic Con in Bournemouth!

This is the third convention organised by Showmasters in my home town and it always gets a big turnout. The people of Bournemouth love a chance to meet actors from their favourite TV shows and films and buy awesome merchandise! Showmasters were very generous and gave me a Press Pass so I could report on this event for my Project Indigo readers.

Film & Comic Con Bournemouth took place at the BIC once more on the 3rd and 4th September 2016. I went on both days because there were different Doctor Who actors there on each day and I wanted to meet all of them!

When I arrived on Saturday I explored the stalls straightaway as I have been caught up in the Pokemon Go craze and I was really keen to find a Pokeball. There were so many stalls that there was bound to be one on one of them. Many stallholders had made their items and liked the chance to show their skills.

One stall that caught my eye was called Small World Pictures. I met the artist Bob Ford who draws a lot of amazing Sci Fi drawings. He uses pen and ink to draw very detailed pictures with little characters. Each picture takes him 35 hours to make which must be tiring. His Doctor Who picture was spectacular and contains all the Doctors and all the companions up to today. Make sure to take a look at his website to see what he can do!

I also saw Doctor Squee from Gallifrey Stands Podcast on another stall. He and Claire were holding a stall called Dottie’s Charms selling sci-fi style jewellery and Doctor Who lip balms and candles. The candles are all inspired by Doctor Who characters such as the Fourth Doctor Jellybean, the TARDIS Blueberry Muffin and the Dalek Dark Chocolate. You should definitely check out Dotties’s Charms if you like Sci-Fi themed goodies!

After shopping it was time to meet the stars. The first person I met was Jacqueline Pearce. She played Chessene in The Two Doctors (1985) and has done multiple roles in Big Finish episodes. She is most famous for playing Servilan in Blake’s Seven. Jacqueline was nothing like her Doctor Who character as Chessene was a bad guy and Jacqueline was very kind. I asked Jacqueline my questions and she told me all about Seville where she filmed The Two Doctors. If Jacqueline could go anywhere in time and space she would like to go to Edwardian times because she loves the frocks! 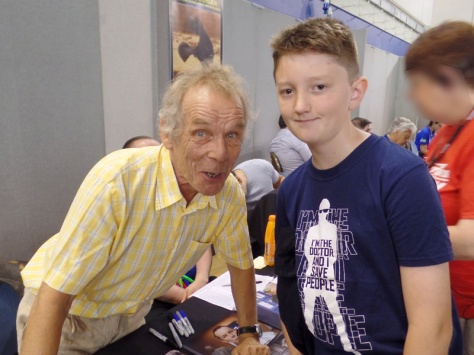 After Jacqueline I went next door and met Christopher Fairbank who played Fenton in Flatline (2014). Christopher has been in everything in the world (slight exaggeration!). He has been in Dickensian, Guardians of the Galaxy, Jack the Giant Slayer, Curse of the Were-Rabbit, Pirates of the Caribbean On Stranger Tides and many more that I won’t put because it is making my head hurt to think about it!

I asked Christopher about filming Flatline and he told me all about where he filmed around Cardiff in subways, a blocked off viaduct and a shopping centre and Barry Island. When filming part of the tunnel scene in a disused railway (in Winchcombe) he said that they had to be careful to stay off the railways lines in case a phantom train came. He also said it was very smelly there which added to the atmosphere.

If Christopher could go anywhere in time and space he would not like to go the future but he would like to go to the 19th Century as he is big fan of Charles Dickens. Christopher was a very jolly man and I was very happy to meet him.

After speaking to Christopher I went back home and came back the next day. On Sunday I started off in the Cosplay Zone and watched an epic lip-synch battle. Many people cosplay at conventions and it is a great chance to show what they like. I saw lots of great cosplays including many different Doctors and companions. Check them out here:-

Sarah as the Fourth Doctor

Liam as the Eleventh Doctor

Quinn as the Eleventh Doctor

Ian as the Fifth Doctor

Lucy as the Eighth Doctor 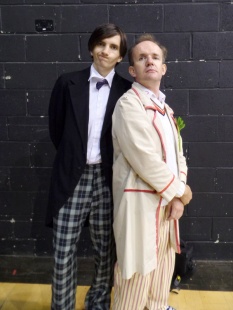 Mitchell as the Second Doctor, Ian as the Fifth Doctor

My first meet of the day was Peter Purves aka the First Doctor’s companion Steven Taylor. Peter is also well known as a Blue Peter presenter so I showed him my badge and told him about Project Indigo being featured on a Blue Peter Doctor Who special.

Peter said he filmed Doctor Who in not very exotic locations like Egham Borough Council sandpit. He did get to Frensham Ponds to film the The Myth Makers (1965). He said he got to go to much better places for Blue Peter.

If Peter could go anywhere in time and space he wouldn’t go too far back as there are many things that make it difficult to survive. He doesn’t have much hope for the future so he would be happy just to get to see tomorrow! It was an honour to meet Peter.

Next to Peter was Richard Franklin aka Captain Mike Yates, member of UNIT who helped the Third Doctor. Richard was very friendly and told me about his filming locations. He said he had 1 good location and 8 awful ones. The best was 2 weeks in Aldbourne, Wiltshire where he filmed The Daemons (1971). The first week of filming they enjoyed proper sunshine and the next week they had a snowstorm! He told me I should go there and see the Village Green and all the other places they filmed. Richard’s worst location was Dungeness Beach in January as it was very cold indeed.

Following Richard I went to see David Gooderson who played Davros in Destiny of the Daleks (1979) and he said the others got to go to a quarry in Swanage but as Davros he was stuck in the studio. If David could go anywhere in time and space he would go to Mars as he has been very intrigued by all the news reports about the exploration of Mars. I had a great chat with David all about school as I was starting big school the next day and he was a very cheery man – most unexpected for the creator of the daleks!

After David I met Tom Hopper who played Jeff Angelo in The Eleventh Hour (2010), who helps save the world by letting the Eleventh Doctor use his laptop to spread a virus. As well as Doctor Who, Tom starred as Sir Percival in Merlin and Billy Bones in Black Sails.

If Tom could go anywhere in time and space he would like to go back to the 1980’s when he was born, and also go forward to the future – in fact be just like Marty McFly in Back to the Future! He would even like to go the Wild West just like Back to the Future 3. What a creative answer. Tom was really sweet and I enjoyed talking to him a lot.

My last chat of the day was with Deborah Watling who played Victoria, companion to the Second Doctor. I told her I had just visited Botany Bay where she filmed Fury from the Deep (1968) and she said ‘I had forgotten all about that. Thank you for reminding me!’.

I asked Deborah if she had been to any good filming locations for Doctor Who and she said that I had to be joking. All her locations were gravel pits and tanks of foam – nothing glamorous. If Deborah could go anywhere in time and space she would like to go to the Moon. I wonder if she knows that the moon is an egg?

My last event of the day was the Doctor Who panel, where Deborah, Peter, David and Richard answered questions from the audience.

They were asked what their favourite episodes were and said:-

Deborah – Fury from the Deep as she loved the monster.

Peter – The Massacre of St Bartholemew’s Eve (1966)  which only exists in audio. Steven was heroic in the story and Peter prefers the historical stories to the monster stories.

David – Destiny of the Daleks as he thoroughly enjoyed playing the man in the chair.

Richard – Planet of the Spiders (1974) as he got to choose street clothes for Mike to wear.

They were all asked if they would like to appear in Doctor Who on TV again. Richard said he would love to but no-one has asked. Peter and David would both like to play the Doctor and Deborah would like to be the first female Doctor!

Deborah spoke about her Doctor, Patrick Troughton, and said thank you to all the fans of Doctor Who who help keep his memory alive.

It was really interesting to listen to other people’s questions and hear all about filming classic Doctor Who.

I had a really exciting weekend at Film & Comic Con Bournemouth. Thank you to Showmasters for bringing these conventions to Bournemouth and giving us all a chance to meet our heroes! Thank you to everyone who took the time to talk to me.

Thank you for reading and I hope you stay tuned for my next post which will be coming up soon. This week I started secondary school so I will be having lots of homework. I will post as often as I can but will have to do my homework first!