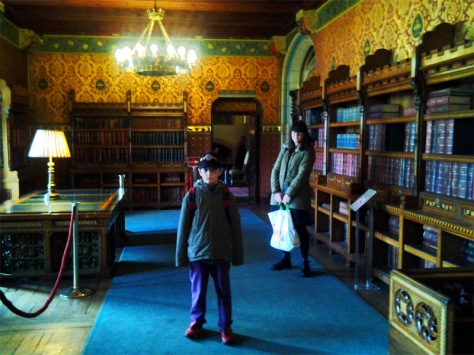 We are back in Wales in February again, for another Cardiff Doctor Who location. We are in  the library of Cardiff Castle which was used as a filming location for Journey to the Centre of the TARDIS (2013). It was used as the TARDIS library which was found by Clara when she was running away from some Time Zombies. When she was there she found a book called The History of the Time War and saw the Doctor’s real name in it. Later she said to the Doc:

‘The library. You were mentioned in a book. You call yourself Doctor. Why do you do that? You have a name. I’ve seen it. In one tiny corner of that tiny book’.

It is a very scary episode but luckily when I was in the library there was no sign of a Time Zombie. It was a very quiet and safe place full of beautiful old books. Unfortunately I couldn’t see the Encyclopedia Gallifreya!

The library is very grand and the bookcases are decorated with animals of all sorts. There was daylight coming through the window, unlike when Clara was there, and the ceiling was not infinite – good ol’ computer graphics! 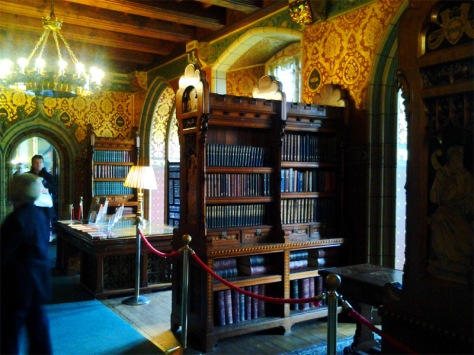 You can get married at the Castle and have your reception in the library – how cool would it be to have your wedding in a room of the TARDIS????? 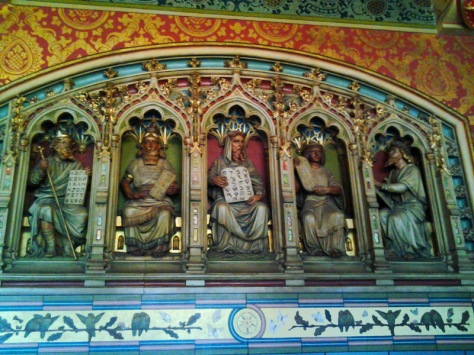 I will tell you about other locations within Cardiff Castle soon in another post.

In other news – this Friday I found a copy of the 285th issue of Doctor Who Adventures magazine- complete with Amazing Doctor Dress Up Set.  Dress Up Sets are cool!  The set contained a TARDIS key, sonic screwdriver, bow tie and psychic paper. I was inspired and used them to dress up as a different Doctor ( I think you already know which one it is!) . I copied the outfit the Doctor wore for Journey to the Centre of the TARDIS but I wish I had put a Big Friendly Button mark on my hand – maybe next time. I hope you like the pictures!

Until next time, Da boch chi!