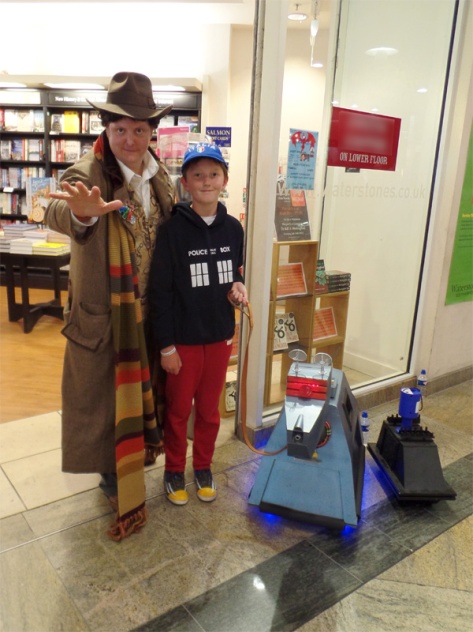 Welcome to Waterstones at West Quay for the Pendragon Sci-Fi and Fantasy Club Charity Funday! This event was organised by the club to raise money for the Princess Anne Hospital in Southampton which helps many sick and premature babies, so I wanted to show my support. This was held on Saturday – I wish I could have gone all day but I was a busy little Timelord that day and could only pop along towards the end.

When I arrived I was greeted by Brian – he was rocking a Fourth Doctor Cosplay and had his companion K9 with him. I met Brian at the Comic-Con 2 in Totton and it was nice to catch-up and Brian told me about the other Cosplays he is planning. 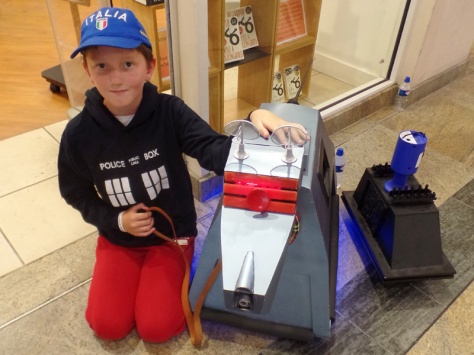 I went downstairs to where the action was and met my new friend Matthew Dale aka (big) Little John from Robot of Sherwood (2014). It was quite late so the other celebrity signers had left, but Matthew was the last man standing. I was looking forward to meeting Sergeant Benton, John Levene, but he left just before I arrived. I was sad that I missed the opportunity to meet him. The other celebrities were Richard James from Space Precinct and Brian Wheeler from Return of the Jedi. I believe Matthew was having a great time as he was very chuckly. I hope that the Doctor will go back to Sherwood someday to meet Robin and his Merry Men, it would be nice to see Matthew in another Doctor Who episode!

Next I tried my luck at some games. First was the Tombola, and I won a smashing travel game of Battleships which I can keep in my TARDIS. Then I played Pick-a lolly and won a mystery prize. I later found out that the mystery super surprise prize was a reporter’s pen and notebook which will help me when I am interviewing Doctor Who stars! The last game I played was a treasure hunt and I won a Batman Comic. I was very lucky because I won a prize at every game I played.

I spent the rest of my time talking with the Pendragon Club and other visitors and learning all about the club. Someone gave me a Classic Doctor Who quiz and I got all the answers right – even when he tried to catch me out! Everyone was very kind and it was lovely to spend time with them and make friends. There were lots of great Cosplays to admire too.

As I was leaving West Quay I stumbled across an exhibition of paintings by Adam Barsby and I saw a fantastic picture of the Doctor and the Doc! This picture showed the Fourth Doctor and Doc Brown from Back to the Future swapping Time Machines – can you imagine the Doctor in a Delorean??? 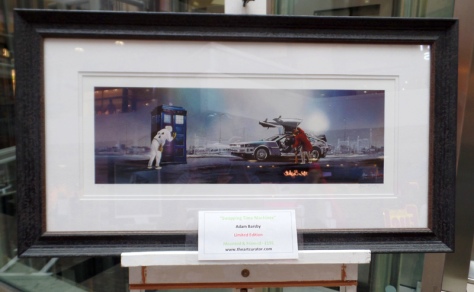 Thanks for reading and Adios!