Hello and welcome to my post which is coming to you from Mars!

In The Waters of Mars the Doctor encounters The Flood. In real life, just over a week ago, Nasa released satellite pictures of Mars which shows evidence of flowing water! This is big news because, if it is water, it could prove there are such things as Martians! Water is  vital for humans and this discovery might mean we could explore Mars ourselves instead of using robots and maybe even live there in the future! Luckily there was no sign of The Flood when I was there….

I visited the National Botanic Garden of Wales during my summer holiday whilst I was staying in Carmarthenshire. This is the most visited garden in Wales and was opened in May 2000, the first botanic garden of the new millennium and it is built on parkland dating back 400 years. I was very chuffed to be able to use my Blue Peter badge for free entry!

Look at the Silurian Rocks!

Learn about the Silurian Rocks

When I arrived I walked through the Broadwalk to The Rock of Ages which tells the story of 300 million years of Welsh geology. I found a rock from Silurian times (Madame Vastra, you should make a visit to see this rock!). In Doctor Who we learnt that the Silurians are lizard like creatures that have lived on earth since pre-historic times -longer than us humans. This rock was 431 million years old!

Next I went into The Great Glasshouse aka Bowie Base One’s Biodome 1! This is the world’s largest single span glasshouse and is based on the shape of a raindrop. It has an amazing indoor display of Mediterranean climate plants and protects and conserves many endangered plants. These plants come from six areas of the world – California, Australia, the Canary Islands, Chile, South Africa and the Mediterranean Basin and it feels like you are travelling the world in Wales! 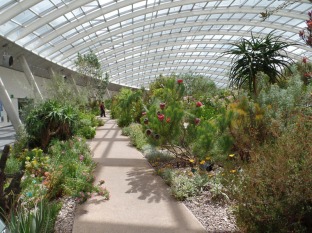 Can you imagine this growing on Mars?

In The Waters of Mars the Tenth Doctor meets the first human colonists of Mars, led by Captain Adelaide Brooke. I found out that the glasshouse has the same climate as Adelaide – the city not the person. Adelaide in Australia is one of two places in Australia that has a Mediterranean climate. I wonder if that is how Russell T Davies came up with her name?

Learning about the climate of the Biodome

Half way through my exploring I stopped for lunch at the café and I was surrounded by a bunch of hungry birds – I even saw one hop into the kitchen. In the episode Captain Adelaide explained that the crew had taken birds with them to Mars to keep the insect population down in the Biodomes to help the crops grow.

It was sweltering inside the dome, a lot warmer than the Welsh climate. I felt as warm as if I was in a hot-air balloon. I explored all around, up high and down low and it was very peaceful. I didn’t see The Waters of Mars but I did find a lovely indoor waterfall, complete with fish.

After I left the glasshouse I travelled the rest of the Botanic Garden and enjoyed everything else it had to offer. I really enjoyed my time at the National Botanic Garden of Wales, it was a fantastic way to spend a relaxing day of my holiday. Whilst writing this I realised that I missed out on seeing a Ghost Forest – so if I ever get the chance to go again that is the first thing I will do!

Would you like to visit Mars? Please leave a comment and tell me what you would do.  Thank you for reading, and I hope to see you again next time when I will be telling you all about a very special museum full of surprises…..