And welcome to the second day of Showmaster’s Film & Comic Con Bournemouth! After my adventures on the first day I was a bit tired from meeting all the amazing actors but I was very happy to go back to meet more Doctor Who stars!

First show of the day was the Doctor Who talk and out came Louise Jameson ( Leela), Nicola Bryant ( Peri), Samuel Anderson ( Danny Pink) and the Sixth Doctor himself, Colin Baker! The Q&A was very interesting and lots of fun. The guests were asked to describe their Doctor Who experience in one word.

Mellifluous means sweetly or smoothly flowing, sweetened as if with honey. I know, because I looked it up!

After the Q&A I said hello to Louise Jameson – I didn’t ask her my golden questions because I asked her already at the Timeless Collectors Fair. Louise was very kindly to me and she told me she enjoyed the Q&A which was the first one she had done with Sam, and she thought he was great!

After Louise I met Lalla Ward who played another Fourth Doctor companion Romana II! It was great to meet Lalla for the first time and she was very polite and answered my Golden Questions.

Lalla’ s favourite Doctor Who episode is City of Death (1979).

Lalla showed me a photo of Romana II in Cambridge in the episode Shada (1979) which was her favourite filming location. Sadly Shada wasn’t finished because of a strike, and wasn’t shown on TV but it was released on video in 1992.

If Lalla could go anywhere in time and space she would like to go back in time and see the dinosaurs, but she would want to take a bodyguard to protect her! She would also like to visit other planets and make contact as she believes that there must be life on other planets if there is life on earth. I think she may be right! It would be nice to know we are not alone in the universe but I hope that aliens would be friendly if they did come to earth.

Next I met Nicola Bryant – Nicola played Peri , companion to the Fifth and Sixth Doctor. I have met Nicola before at the Fleet Air Arm Museum and she is lovely. I was really pleased to meet her again.

Nicola cannot choose a favourite Doctor Who episode because as soon as she thinks of one she remembers another she likes just as much. She loves them all!

Nicola’s favourite filming location was Seville where she filmed The Two Doctors (1985). She said the food was great. When I met the Sixth Doctor, Colin Baker, his answer was the same so I guess they had a good time!

Lastly Nicola told me that if she could go anywhere in time and space she would like to travel back 25 years and see her father who sadly passed away. She said the best times are times spent with loved ones. I agree, I would love to use my TARDIS to visit my Great – Nana who I miss very much and my Grandad who I never got to meet.

Finally I met Samuel Anderson again – Sam played Clara’s boyfriend Danny Pink and his ancestor Orson Pink. Sam was the first ever Doctor Who actor I met as I got his autograph at the Doctor Who World Tour in Cardiff in 2014!

In the queue I met Luke who was carrying a TARDIS door. He was asking the Doctor Who actors to sign the door then he was going to take the door home to put back on his own life-size TARDIS. I wonder if it is bigger on the inside?

Luke and his TARDIS door

He enjoyed filming in a bar because he got to sneak a beer – shhhh! His favourite Doctor Who filming location was the set of the TARDIS because it is kept under lock and key and not many people get to film there!

Sam would like to travel in time to see the dinosaurs, and the pyramids being built, but he would REALLY like to go to Harlem in the 1940s and see the Jazz Greats performing.  I told Sam that Doctor Who Script Editor Andrew Cartmel told me that as well – they should hang out together.  Sam is a Jazz Singer too – maybe one day Jazz fans will want to travel in time to see Sam singing!

Sam was supercool, it was great to meet him again and he was very encouraging about Project Indigo. Thanks Sam!

After I met Samuel I decided it was time to leave as I was pooped out from all the excitement of the weekend! As well as the Doctor Who stars there were film stars from all over the world, including actors from many film and TV Series Star Wars, even Darth Vader himself! And The Incredible Hulk!

There were sports stars too. As I left I met footballer Ron ‘Chopper’ Harris and got his autograph – he is a Chelsea legend! I know it isn’t Doctor Who related but I am telling you about it because it meant a lot to me as I love football and support Chelsea (and Bournemouth of course!).

See you soon for my review of the updated Doctor Who Experience – it was fandabbydozy.

Hello readers! A big thank you to you all – today I have reached the 5000 views mark and I’d like to say thank you for helping me make this possible.

Now we travel to earlier this month and the Fleet Air Arm Museum for the Dalek Invasion!  Fleet Air Arm Museum tells the story of the Royal Navy In the Air and is Europe’s largest naval aviation Museum. It is based at Royal Naval Air Station Yeovilton (also known as HMS Heron) in Somerset and regularly holds special events including the annual Dalek Invasion. I have been there before but this was my first Dalek Invasion so I dressed as the Eleventh Doctor ready to kick some Dalek butt (even though they don’t have butts!).

When I arrived I went straight to the main hall to meet the special guests because I was excited to meet them. The first person I met was Nicola Bryant also known as Peri Brown, the Doctor’s companion from 1984-1986. She was sat next to her husband Nev Fountain. Nicola and Nev had replied to a tweet I had sent so they were expecting me, and recognised me from my photo. Nicola was a very nice lady and looked just like she did on TV, but she didn’t sound the same as she had an American accent in the show. She was really friendly but I was shy. She signed a picture of her and the Sixth Doctor with some Daleks and posed for a photo with me. I couldn’t believe I had met a star of Classic Doctor Who – she was my first ever!

Next I talked to Nev Fountain who is a scriptwriter. Nev helped me pick out my first Big Finish CD and recommended some which would be good for a 9 year old. I chose Breaking Bubbles because it had one of Nev’s own stories and I promised Nev that I would listen to it and write a review. (See below). Nev signed the CD and also posed for a photo with me. 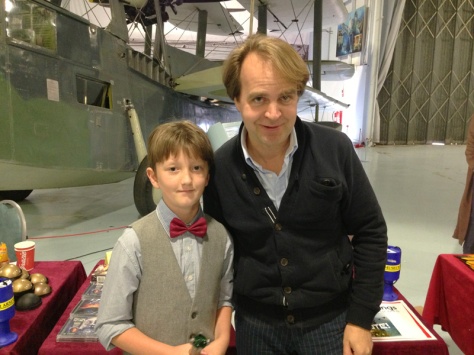 After I met Nicola and Nev I explored the museum. All around me were people dressed as their favourite characters, I could see the Tenth Doctor, Second Doctor, Seventh Doctor, a Silurian, Reinette, Captain Jack and many more. I even saw K9 who was little but very fast. The Daleks were going to exterminate people with their water guns. One Dalek was dancing to Gangnam Style by spinning round and getting close to people! Someone took a picture of the Dalek and he said “I’m sure that’s a lovely picture of my bum.” Awkward! I wanted the Daleks to stay back because they are EVIL.

Next I shifted on to the BAC Concorde which is the actual first British-built Concorde – a turbojet powered supersonic passenger airliner. This was the not the Concorde that disappeared in the story Time-Flight (1982) but that story used a second Concorde as its set. It was the first ever TV show filmed on an actual Concorde or at Heathrow Airport! I was surprised that the ceiling was very low and I had to duck.

Sadly I didn’t fly anywhere on Concorde but I did go on a simulator afterwards. It was of a helicopter flight and it was so fidgety that I kept falling out of my seat!

Next I went to meet Jon Davey who is a Doctor Who monster actor and has played many characters such as an Ood, Cyberman, Whisper Man, Winder and even appeared as an android inDeep Breath (2014). Jon showed a video of him being made up as a Whisper Man. That took three hours but on video was only 50 seconds. He was a Dalek on the Red Carpet at the Doctor Who World Tour and showed me photos he took from inside the Dalek. Maybe I was in one of the photos? I think it must have been very cramped in there. Jon was very nice and spent lots of time chatting. He also signed a picture of him with the Twelfth Doctor and posed for a photo with me.

Afterwards I went and enjoyed the entertainment until it was time to go. I had a great workout on the way back to my TARDIS to keep me fit and ready for kicking Daleks out of time! I had a great day and will go again next year – if my TARDIS doesn’t malfunction.

Roger, over and out!

Big Finish Audio Adventure Review – The Curious Incident of the Doctor in the Night-Time by Nev Fountain. (From Breaking Bubbles and Other Stories)

This is my first Big Finish so I would like everyone to enjoy this review. I am reviewing this story because it is the only one on the CD written by Nev Fountain and it is my preferito! MINOR SPOILERS!

This is the story of Michael aged 14. He likes to solve little mysteries made because of invisible rules that he doesn’t understand. One day he was helping his Dad in his DIY shop and said ‘Dad you should change the Do It Yourself Sign because it is rude. At least put a please at the end of it!’. His Dad said that Michael was from another planet and Michael believes him.

His dad had 129 gnomes but one day when Michael counted there were 130. At the same time his Dad had gone missing and Michael suspected his Dad had been turned into a gnome. Michael set out to solve this big mystery with the help of the man in the yellow trousers – (old Sixy) and the girl with a boy’s name (Peri). Michael and the Doctor are very similar because they both like solving mysteries and are very logical.

I thought this story was great because I really liked Michael as he is a very clever boy. The story is also very sad but the Doctor teaches Michael how to time travel in his mind to help him feel better.

I enjoyed listening to the adventure because you can make up the pictures in your head and use your imagination to tell the story. I would like to listen to more CDs in the future.