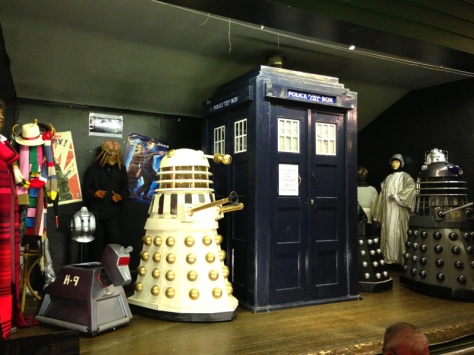 Greetings and welcome to DEF Con 3!

DEF Con 3 was held this weekend in the Empire Hall in Totton near Southampton and spilled out across the town. It is a Sci-Fi Fan convention run by Nerdageddon and raised money for the Piam Brown Ward at Southampton General Hospital.

I knew there would be Cosplayers but this time I didn’t want to dress as the Doctor as I have on other occasions. I dressed as another character. Can you tell from the photo? Leave a comment if you want to take a guess.

The first thing I did when I got there was go to meet Colin Baker – The Sixth Doctor! When I arrived he was free and I thought I would take my chance. He is the Second Doctor I have met, after Peter Capaldi. The Sixth Doctor was very stroppy, a bit like the Twelfth! 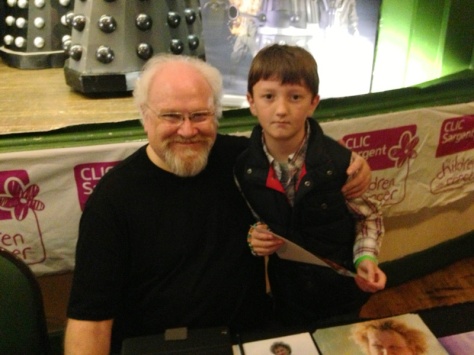 I was extremely shy meeting Colin, although he was very friendly.I couldn’t believe I was talking to the Doctor! I asked Colin where his favourite location was where he filmed Doctor Who and he told me it was Seville in Spain where he filmed The Two Doctors (1985). I fancy going to Seville for my blog!

Then I asked Old Sixey if there would be a second Five-ish Doctors Reboot (2013) but he said he doesn’t know. He said they needed a good idea for a story first, to top the last one! I hope there will be a sequel because I really lol-ed and rofl-ed at the first one –  it was something that could always tickle your funnybone!

I chose a picture for Colin to sign and he posed for some great photos with me.

Later I went back to Colin to ask if he could travel anywhere in time and space, where would he like to go? He had a quick think then told me he would like to ‘travel to London, 1000 years in the future, just to see’.

It was really good to meet Colin because he was a very nice man. He didn’t have the yellow curls anymore – or the bright trousers!

Then I went on to meet Simon Fisher-Becker who played the Eleventh Doctor’s friend Dorium Maldovar , who owned a black market bar in the 52nd Century known as The Maldovarium. On his website Simon is described by Tom Macrae as ‘ The best blue actor in the business!’.  Simon was also in Harry Potter as the Fat Friar. 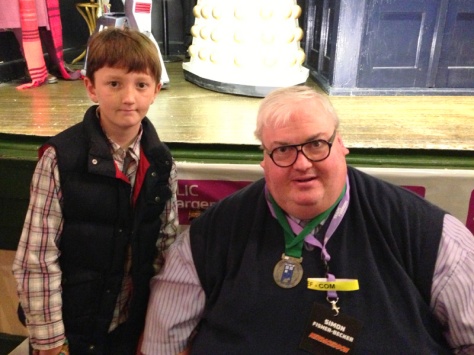 Simon is a great chap, like Colin, and was very chatty. I asked about filming locations and he said that when he filmed as Dorium he spent most of his time in the studio but he does remember filming in an aircraft hangar at three in the morning and being very cold!

He was wearing a medal from the Doctor Who 50th Anniversary Fun Run which was given to him in New Zealand. This virtual fun-run was to commemorate the 50th Anniversary of Doctor in November 2013.

Simon told me about his one-man show ‘My Dalek Has a Puncture’, all about being an actor. He has been on a tour with his show and new dates are being added so I will go and see his show when he comes locally to me next year. It sounds like it is going to be really funny!

Next I asked Simon where he would go if he had a TARDIS and could travel through time and space. He said that he would want to be there for First Contact – even it was just to make the tea! He also said that he would like to witness his own family history and see if his family’s stories were true.

It was really nice to meet Simon and I hope I meet him again in February when I see his show.

After I met the actors from Doctor Who I trotted around to see what merchandise there was and saw the stars from other Sc-Fi. There were even stars from Red Dwarf and Star Wars  including Daft Vader – David Prowse! Ooops, I mean Darth Vader.

There was a Lightning McQueen outside one of the halls and when I went out to take a look, a man honked his horn really really really loud. There was also a huge 35ft Stay Puft Marshmallow Man from Ghostbusters.

I enjoyed looking at all the Cosplayers and saw a Brigadier Lethbridge – Stewart, a Fourth Doctor and a Tenth Doctor. Someone had brought along a K9 and I thought someone had dressed their dog up so they could get in for free. 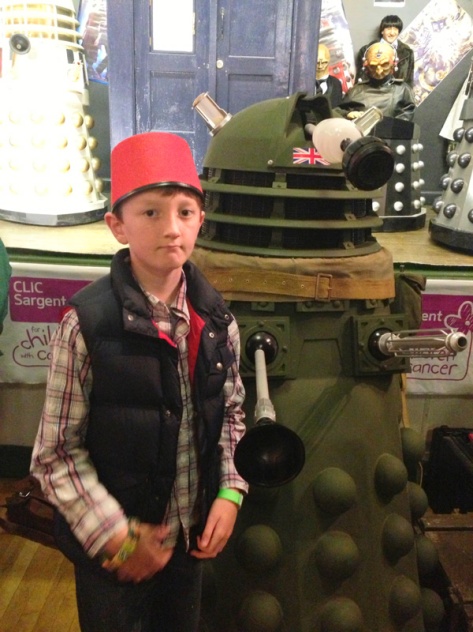 DEF Con 3 was really good fun and I had a great day – I hope they do it again next year.

Thanks for reading and I hope you’ll come back soon.

May the force be with you!