Croeso and welcome back to another Doctor Who locations post!

Timey-wimey stuff! Today we are travelling back in time again in my TARDIS to August 2014 and visiting Chepstow Castle in Monmouthshire. This is where The Day of the Doctor (2013), the 50th Anniversary Special was filmed and I wanted to see where the Doctor married Queen Elizabeth in England 1562!

Chepstow Castle was also used as a filming location for the monastery in the Doctor Who two-parter The Rebel Flesh and The Almost People (2011), and also Merlin,  the 1980’s TV series Robin of Sherwood ( not Robot of Sherwood ) and Ivanhoe – which was filmed 102 years ago!

Chepstow Castle is on a cliff overlooking the River Wye. As you can see in the amazing shot in the episode when the Doctor and Elizabeth are first seen, it is breath taking stood on top of the cliff looking out over the valley. This Norman castle is the oldest still-standing stone fort in Britain. It was built in the 11th Century and started just a year after William the Conqueror’s invasion of Britain. It was built by William Fitzosborn, a relative and friend of William the Conqueror, who became the Earl of Hereford. Until the late 14th Century the Normans called the castle  ‘Striguil’ from the Welsh word ystraigl meaning “river bend”.

Chepstow Castle is managed by CADW who conserve Wales’ heritage, and I have been to many Doctor Who locations looked after by CADW including Caerphilly Castle and Neath Abbey. I had a great time at this castle and explored all around. I saw the oldest castle doors in Europe (800 years old and made of wood!) Imagine all the history that these doors have seen! I walked along the battlements and climbed a tower and had a fantastic view of Wales. I even saw the scariest toilet in probably the whole world – the scary thing is that it is over a cliff. Aaaaargh!!

I saw where the Tenth Doctor and the First Elizabeth got married, watched by the War Doctor, Eleventh Doctor and Clara. Clara threw confetti over the couple as Elizabeth gave the Doctor a very big snog! Then the Doctors and Clara went ‘back to the future!’I wonder if they saw Marty McFly?

I spoke to the Chepstodians about Project Indigo and how I like to follow in the Doctor’s footsteps. One of them was there when the crew were filming and she told me that they had built the Zygon’s nest in the castle cellar! She was so lucky – if I could watch Doctor Who being filmed I would be so happy.

Chepstow Castle was the first location I visited on my Welsh adventure last August and I am happy to say I will be going back to Wales again this summer to revisit my Welsh roots – and visit some more Doctor Who locations of course 🙂 .

I’m sorry there has been a delay with this post – I have had computer trouble but I made it in the end. Thanks for reading, I hope you will come back and join me again for my next Doctor Who adventure!

We’re back in Cardiff for another post for you.  We are off to The Doctor Who Experience on the 4th August, on a lovely sunny day and I am so excited. I am going to the door and ooopps, sorry CLOSED! Retake!  Awwww!

But I walked around the side and noticed  some SFX trucks. There was some filming going on in there! I wonder why…… A Christmas Special? Five-ish Doctors Sequel? A new intro? I’d love to know.

(UPDATE – I have now found out that Peter Capaldi was inside filming a new version for the updated experience! ) 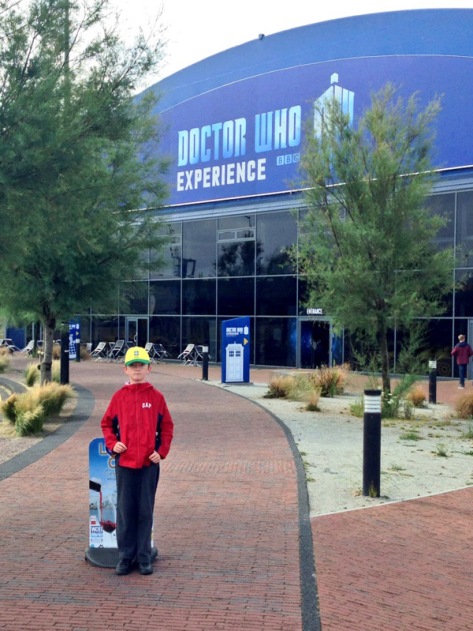 Now it is the next day, sorry about that, now it really is open and I went in to see the action. I didn’t have to pay because I used my Blue Peter badge! It was very busy (like it always is) because the Doctor is famous worldwide and this is THE place to come to if you are a Doctor Who fanatic. I have been there three times now- August 2014, February 2014 and August 2011 when it originally opened in Olympia in London, before it moved to Cardiff. I came back to see the Eleventh Doctor, Matt Smith, for the final time before the Experience closes on August 31st to change over to the Twelfth Doctor.

Inside the walls are covered with loads of fantastic Doctor Who artwork. I don’t know who did it but they are a great artist and I wish they could decorate my bedroom!

First stop was the interactive experience, it was my last chance to save the Eleventh Doctor from the Pandorica. I stepped through a crack in time and went on a real journey through time and space! First up, Starship UK then I went into the actual TARDIS which really was bigger on the inside, it’s true. I met the Daleks and Weeping Angels and helped rescue the Doctor- who was really silly to get stuck in the Pandorica for a second time! Some children were crying because they were scared but I wasn’t one of them luckily!

Straight out, I went to get a photo taken. There were lots of props to choose from so I took a Fez, bow-tie and a Sonic Screwdriver. I posed in front of a giant green screen and first pretended I was afraid to be on Trenzalore and then flew the TARDIS. I felt a bit weird because there was a big queue and everyone was looking at me but it was good fun and I chose to buy the photos of me on Trenzalore. I had two photos and they were e-mailed to me as well.

Next I travelled around the exhibition. This is actually a filming location, not only for The Day of the Doctor (2013) where they filmed the Tenth Doctor at his TARDIS console but also An Adventure in Space and Time (2013), which is a film about the creation of Doctor Who, and The Five-ish Doctors Reboot (2013), which is a really funny film about the Fifth, Sixth, Seventh and Eighth Doctors trying to get in on the 50th Anniversary episode. I have met Andrew twice, and he is featured in The Five-ish Doctors Reboot as one of the employees who took John Barrowman CDs from the Fifth, Sixth and Seventh Doctor as payment for getting into the Experience! He is a very nice man and let me take a photo the first time I met him.

The exhibition has the worlds largest collection of items that have been used for filming – costumes, props and sets. This time there were even more than the last time I went as there were lots of items from the Christmas special, The Time of the Doctor (2013). These included the puppet theatre, Tasha Lem’s bed-shaped altar and poor old Handles, the Cyberman head who helped the Doctor on many occasions and became his best friend when he stayed for Christmas.

You can see all the characters including Daleks, Cybermen, Ood, Abzorbalof, Zygon, Smilers, and a bunch of others too many to mention. You can see costumes for all the Doctors and lots of the companions and the Doctor’s old TARDISes. You can control a Dalek, watch some making of Doctor Who films, learn to walk like a Scarecrow and a Cyberman, and listen to the sound effects. Everybody inside is so joyful to see and do all these things and they take lots and lots of photos to remember the day. Everything you see makes you go ‘Wow’!

Now we have left the exhibition we are in the shop which is crammed full of Doctor Who items such as pictures, Sonic Screwdrivers, T-shirts and loads of DVDs and magazines to choose from. I bought a Cybermen wristband and a keyring with my favourite Doctor, number Seven on it.

I had a brilltastic day and can’t wait to go back again. I hope I get to see the Experience when it has regenerated into the Twelfth Doctor’s story. Have you been there? Please leave a comment and tell me what you liked best.