Croeso and welcome to the West Wales Museum of Childhood in ….West Wales! We are travelling back in time to August 2015 for a trip down Memory Lane. I visited the West Wales Museum of Childhood during my summer road -trip around Wales, and I popped into the museum when I was leaving Newcastle Emlyn on my way to visit Conwy. I got a big surprise when I discovered there were a lot of Doctor Who toys there – I was expecting all the toys to be old fashioned.

The West Wales Museum of Childhood is at Pen-ffynnon, 1 mile from Llangeler in Carmarthenshire. There is a tea room and a gift shop and the museum has 10,000 exhibits! A warm welcome is offered to ‘everyone who is – or ever has been – a child’.

The museum was created by Paul and Hilary Kennelly and Vic Davey to display the toys and memorabilia that they have been collecting for most of their lives. They bought the farm, Pen-ffynnon, in August 2002 and gradually turned it into the place I am reviewing today. I had a good chat with Hilary and she told me that she met the Third Doctor, Jon Pertwee, many years ago when he was playing Worzel Gummidge.

Is the Doctor here?

Can you guess what decade this is?

When I arrived I went into the ‘Oriel Amser’ (Gallery of Time ) which is a timeline of the 20th Century with memorabilia and displays of toys to look at.
Next to this is a stable where you can see costumes and traditions from Wales, and an antique toyshop window ‘Siop Deganau’ displaying Welsh toys.

Next door is a barn full of little metal toys and an old school room that shows you what school was like in Wales’ old days. Next is the carthouse which contains train sets and a huge collection of Action Man toys.

Finally we come to my favourite bit – the Doctor Who stuff in the Television and Film Gallery! This was originally the kitchen in mid-Victorian times. It contains lots of merchandise from film and television over the last 60 years. At the entrance is a magnificent mural painted by Paul, depicting a Dalek exterminating a TV , whilst the Eleventh Doctor and James Bond have a sonic weapon-off!

The room is crammed with Sci-Fi treasures including an original Dalek Dress-up suit from 1965. I dressed up as a Cyberman but deleted nothing as I was a good Cyberman. I would recommend any Doctor Who fans who live in, or visit West Wales, to go and see this collection. There are A LOT of special Doctor Who treasures to treasure which have been happily collected and displayed for you to enjoy. It was lovely to look at the toys and imagine what it would have been like to be a Doctor Who fan 50 years ago and I even saw some items from my own toybox. 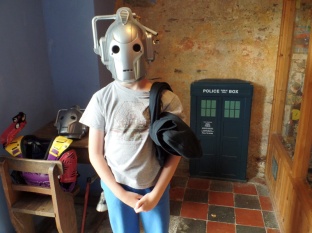 You could have your very own TARDIS

A Matchbox collection – spot the Robot!

What are you doing up there K-9?

This museum was an amazing place to visit and I really enjoyed riding on the kiddy cars. If you are ever in Carmarthenshire make sure you stop off and see it for yourself! If you have been already please leave a comment and tell me what you liked best.

In other news, I am off to London this weekend to go to the Doctor Who Festival! There will be lots of stars there including Peter Capaldi, Jenna Coleman, Michelle Gomez and Ingrid Oliver. I hope you will come back soon so I can tell you all about it.