Roll Up Roll Up and welcome to Warmwell Quarry – scene of The Greatest Show in the Galaxy! (1988).

I was lucky enough to visit this private quarry and have an exclusive tour – the filming location for my favourite Doctor Who episode ever.The Greatest Show in the Galaxy is my favourite episode because it is fun, adventurous and the theme of the story is very interesting to me – and of course it features the Seventh Doctor (one of my two favourite Doctors!) and Ace.

Warmwell Quarry is near Dorchester in Dorset and is owned by Aggregate Industries UK. Sand and gravel is extracted from the quarry but this is due to finish in 2017. A company called Habitat First Group is going to develop the area into a holiday resort and nature reserve called Silverlake so I was really pleased to get the chance to see the location before it changed forever.

When I arrived I was happily greeted by Peter Mole, the Quarry Manager. He took me to his office and showed me a presentation about the quarry and it’s history and lots of photographs. Gravel and sand from the quarry has been used for many things including sports pitches and was even used to help build The Olympic 2012 Park. Peter then told me that the quarry was also used in the final Classic Doctor Who episode Survival (1989)as the Cheetah Planet – I was surprised as I didn’t know this before I arrived.

Next we went off to explore the quarry – I left my TARDIS behind and went in the site car which was really mucky with mud and sand from the quarry all over it! First we went to see part of the site that was used for filming Doctor Who. It is over 20 years since the filming took place so the quarry looked very different. It was less rocky and wasn’t dry – it was filled with lakes so it didn’t look much like the planet Segonax but it was very beautiful.  Segonax was always very bright but it was a wet day when I visited. Soon there will be holiday homes beside this Silverlake – it would be so cool to have a home looking out on an alien planet!

Luckily I was wearing wellies as it was really squelchy and my feet were sliding around like I was on ice. I was also wearing a hard hat and a high-vis jacket as it is a very dangerous zone. Peter was wearing an orange jumpsuit that looked just like the Doctor’s spacesuit!

Next I was lucky enough to get a ride in something big – I’ll give you a clue. IT IS BIG! That’s right – a huge dumper truck. I had to do a little bit of climbing and then there was a big rocky ride in store for me. Another Peter was driving the truck – he has worked at the quarry for many years and was there whilst the episodes were being filmed and met the cast and crew but doesn’t remember much as it was so long ago! It was very high up in the truck and there was a big vibration going through my body. A digger loaded the dumper and we set off for the sorting plant to unload the truck. I had planned to take a lot of photos from the truck but the battery in my camera went, sadly. The vibration was so noisy it was giving me a headache but it was really good fun. When it was time to climb down my legs were like jelly! 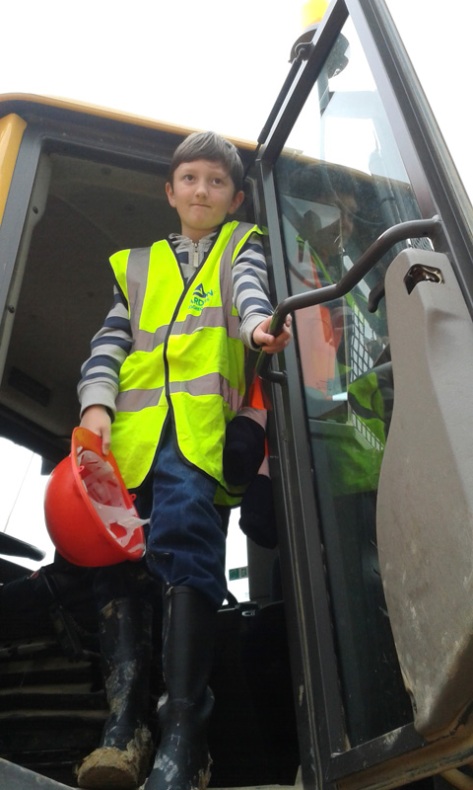 After that adventure we went to see the woods which were used during World War 2 by RAF Warmwell . The area was used by the Royal Air Force and the United States Army Air Forces Ninth Air Force from 1937 -1946. We saw where the Spitfires would have been kept under cover of the trees to keep them safe from view. We also saw the entrance to an underground bunker where the airmen took cover. The bunker is surrounded by barbed wire to keep people and animals out in case the bunker collapses. The airmen must have been scared inside the bunker, they were very brave. It looked very dark and frightening – I wonder if there were bats inside?

Through the woods we got another close-up view of the filming location- the quarry has changed so much. It looks like the Seventh Doctor just missed out on finding the green bit of Segonax that he was looking for. Luckily there was no sign of the Gods of Ragnarok or the Cheetah People when I visited.

We then went to another part of the quarry which has been left for many years to return to nature. The ground was jagged like a lunar landscape and trees were growing out at different degrees. In the old days quarried ground would be left as it was but nowadays quarry owners work to restore the land once they have finished with it so it can be used for other things, and to leave a nice habitat for the wildlife. Many animals live on the land and when I was there I saw pheasants and other types of bird and I just missed out on seeing a deer. Adders live there too but I was pleased not to see one – I think they were in hibernation.

I then went to the sorting plant and saw how the sand and gravel is sorted by size. It is then sent off to be used for building or bagged up and sold in DIY shops! 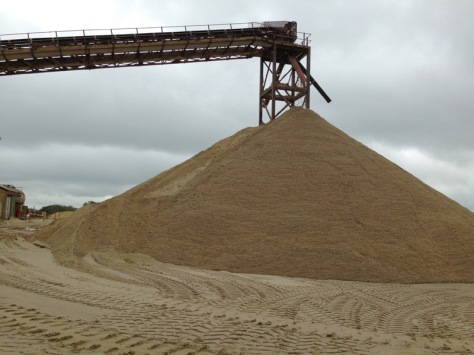 Finally I explored a secret part of the woods – and discovered a Roomoon for the very first time. A Roomoon is a very special lightweight hanging canvas tent based on the shape of an onion. I pulled a chain to yank myself up into the trees and it felt so safe and cosy inside – it felt great to be up high and I didn’t want to come back down.

To finish off I would like to thank Peter Mole and Peter for showing me around Warmwell Quarry – I had a fab time and would love to have more adventures like this in the future. I really appreciate all the time and effort put into giving me and my companions such a good tour of the site. Thank you both so much!

I hope you have enjoyed this post all about this Classic Doctor Who location and there are still many locations left to come. I hope you come back and read about my next adventure.