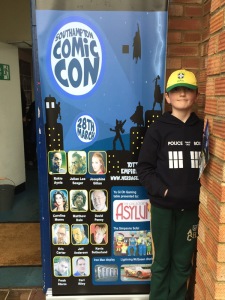 Welcome to my review of Southampton Comic Con 2 which I went to yesterday and I had a great time! This convention was organised by Nerdageddon, who organised DEF Con 3, and the event raised money for CLIC Sargent for children with cancer. It was held at the Empire Hall in Totton near Southampton. 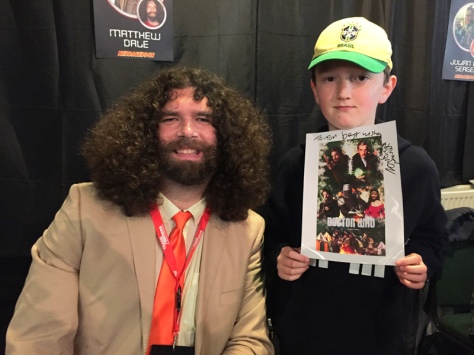 When I arrived I went straightaway to meet Matthew Dale who played Little John in Robot of Sherwood  (2014).  It was very easy to recognise him because he looked just like he did in the episode! I told him that Project Indigo readers had chosen Robot of Sherwood as the best episode of Series 8 and he was really chuffed to hear that! I told him my favourite part of the episode was

This is my spoon!

He told me that Peter Capaldi and Tom Riley didn’t enjoy falling in the river for that bit as the water was very cold and everyone laughed at them. Matthew told me that Sherwood Forest was actually filmed in Fforest Fawr in Wales so I will go there one day and tell you all about it.

I asked Matthew one of my golden questions – if he could go anywhere in time and space, where would he like to go? He found it very tricky to decide but said that he would like to have seen the Titanic sail off from Southampton – but obviously not collide with an iceberg. Matthew was a very nice chap and I was chuffed to meet him.

After I met Matthew I explored the convention and watched the amazing Cosplayers.

I met the cutest Cybermen ever, River Song, Emmet from the Lego movie, a Silent (but I don’t remember that) and many more.

When I had lunch I bumped into Brigadier Lethbridge-Stewart with Woolly K9. K9 has met many Doctor Who actors so check out his Facebook page to find out who!

After lunch I enjoyed a Duff beer on the sofa with The Simpsons and my companion. Cheers! 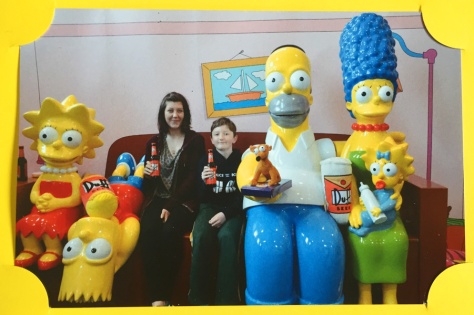 Then I returned to the Empire Hall and a Stormtrooper stole my hat! I had to play tug-of-war with him but I used the force and won it back. Take that Stormtrooper!

After my Tug of War I explored the stalls and met Kris Carter, a comic book creator who colours titles such as Transformers and Doctor Who and also writes ‘Lou Scannon‘ which has been nominated for an Eagle Award. I bought a picture he had drawn of all the Doctors and the TARDIS captioned ‘Who Knows’. It is a really fun picture!

Next to Kris was Kev F Sutherland aka Kev F! I was very excited to meet Kev as he draws for my favourite comics The Beano and Doctor Who Adventures. I posed for a ‘Lightning Fast One Minute Caricature’ and it was great, I can’t believe I have been drawn by a Comic Book artist.

When Kev found out I was a Doctor Who fan he did a drawing especially for me of the Twelfth Doctor coming out his TARDIS shouting ‘Tom, Tom Who?’ I love it! I am going to put my pictures in a frame on my bedroom wall. Kev teaches Comic Book Masterclasses, I would love him to teach me to draw like that one day.

After all that I left for home and stopped off at Lyndhurst in the New Forest and visited the grave of Alice Liddell who was Lewis Carroll’s inspiration for Alice in Wonderland.

While I was there I looked in some shops and look what I found in a window – a tiny TARDIS! Maybe the Boneless survived the trip after all and shrunk the TARDIS again….. 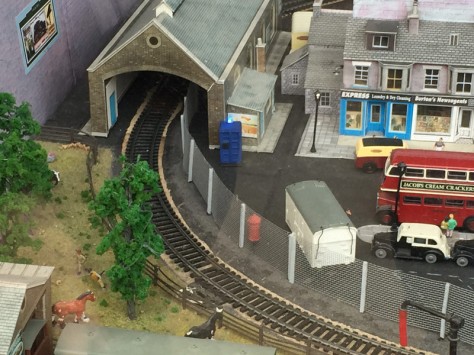 Southampton Comic Con 2 was great and I had a smashing Sfi Fi Saturday – thank you to Nerdageddon for organising it and I can’t wait for the next one – DEF Con 4.

I hope you have enjoyed reading my review – don’t forget to enter my competition to win a Limited Edition Fourth Doctor Audio Adventure whilst there is still time!

See you soon for a Classic Doctor Location report – goodbye!