Hawdammor and welcome to my latest Doctor Who location – Caerphilly Castle!

Caerphilly Castle is the largest castle in Wales and second largest in Britain after Windsor Castle ( home to the Queen, along with many other places!). In 1268 Gilbert ‘The Red ‘ De Clare began to build Caerphilly Castle. He was a redheaded English Earl descended from the Normans and was born down the road from me in Christchurch! He built the castle to stop the land from falling into the hands of Welsh rival Llywelyn ap Gruffudd.

Either that or it is a disguised 29th Century Spaceship!

I visited Caerphilly Castle on a very sunny day and explored the castle because it a filming location for Robot of Sherwood (2014), The Vampires of Venice (2010), Nightmare in Silver (2013) and many more episodes. It is managed by CADW, who conserve Wales’s heritage. As I was walking to the castle it looked full of excitement and I had to enter over a bridge because there was a moat all around it – the same moat that Guido took the Doctor and Rory across to visit the House of Calvieri in Venice!

After I went in, the first area I saw was the large courtyard, setting for the Golden Arrow Archery Tournament in Robot of Sherwood. When I was there there was no sign of the Sheriff of Nottingham or the Robots. Maybe my TARDIS wasn’t set to 1190ish? I made a wish in the well and my coin went PLOP which means that it was going down deep. In the episode the crowd were stood up high watching the archery – this was actually the ‘hourd’ where the soldiers used to fire their arrows and other missiles at their enemies!

Next I ventured into the castle and walked up a lot of stairs. I explored the rooms on the way up and imagined that I was back in Norman times.  It was a nice day but at the top of the towers the windows were tapping and the wind was howling.

The Doctor and Rory were searching all around these corridors and stairs in Vampires of Venice. They even went down a corridor which has a ghost in it! The Braose Gallery is a hidden corridor and is haunted by the Green Lady. I wasn’t very happy to go down it but it wasn’t really that scary. 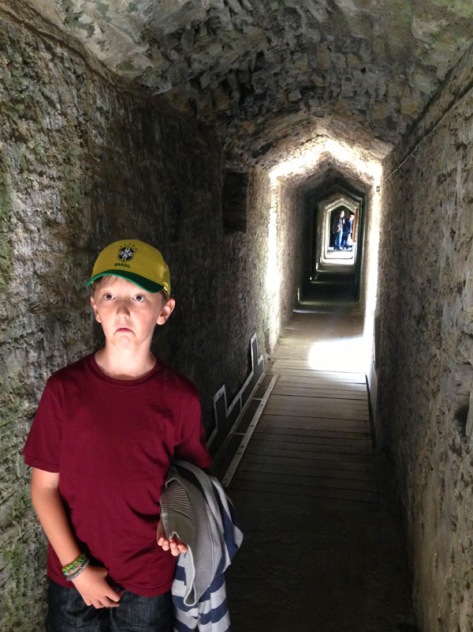 Next I went in the Great Hall and pretended to be a Norman King! This is the room where the Eleventh Doctor played his chess match at Natty Longshoe’s Comical Castle in Nightmare in Silver. It is very easy to recognise even without the Doctor playing chess against the Cyberplanner! 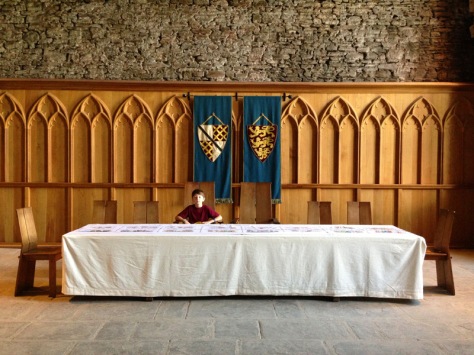 Before I went I visited the Leaning Tower – it leans even more than the Tower of Pisa! Maybe it leans because it was attacked in the Civil War – no-one is sure. I helped out the wooden man who makes sure it doesn’t topple over. He must be very tired!

Finally it was time to leave but I had a double thumbs up great day. Looks like I wasn’t the only one to arrive in my TARDIS today! I think 4, 5 and 6 popped along for a visit too.

Thanks for reading. What did you think of Robot of Sherwood? Are you liking the new Doctor so far? Please leave a comment and let me know.